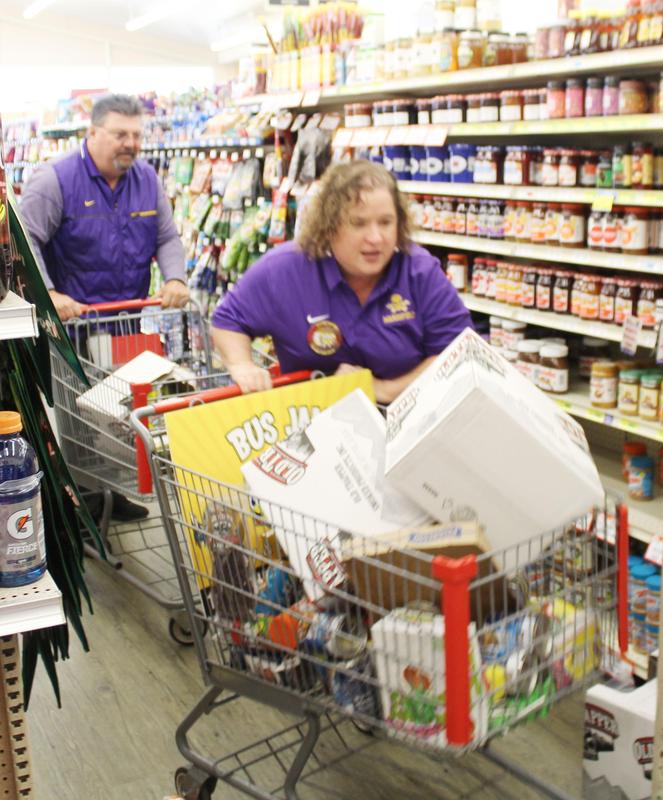 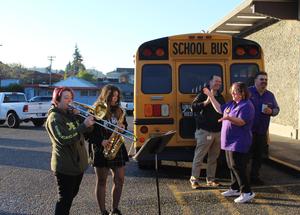 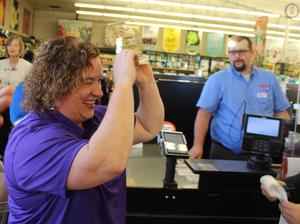 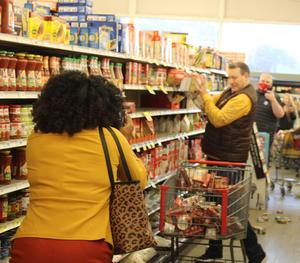 Families in need big winners in shopping spree between superintendents

For the second straight year, the coveted Golden Cart trophy will remain in Coos Bay, but the real winner will be families in need at Christmas time.

All of the food was purchased by NW Natural, along with a large donation from McKay’s, and was then donated the Bus Jam, which provides food and Christmas gifts for families in need at Christmas.

The shopping spree was part strategy and part chaos as McGaughy and Bogatin raced down the aisles at McKay’s, throwing as many items into their cart as possible. Left in their wake were boxes and cans strewn about the aisles as the school leader rushed to collect as much food as possible.

Each superintendent filled two carts that were rung up by cashiers. In the end, McGaughy kept the Golden Cart in Coos Bay by grabbing 704 items in 90 seconds, while Bogatin collected 574. Combined, the superintendents grabbed more than $3,400 worth of food.

As McGaughy was given the Golden Cart trophy, she admitted she went into the shopping spree with a plan. She grabbed boxes of items to speed up the process and pulled ahead thanks to boxes of lollipops as well as boxes of chili seasoning and gravy mix.

The good-natured competition had a Coos Bay slant from the beginning, after members of the Marshfield High School band came to McKay’s with Marshfield Principal Eli Ashton and played the Marshfield fight song as the superintendent’s prepared to shop. Tori Cox and Zoe Smith played their instruments, starting what could be another Bus Jam tradition moving forward.

After the event, the superintendents hugged and urged those in Coos Bay and North Bend to support Bus Jam, which has been feeding and giving gifts to needy in the region for 21 years.

Co-sponsored by K-DOCK and the Coos Bay-North Bend Rotary Club, Bus Jam helped close to 1,000 families provide a Christmas for their children last year. Since Bus Jam started 21 years ago, more than 11,000 children have received Christmas gifts thanks to the generosity of residents throughout the region.

Stephanie Kilmer with the Rotary Club has been involved with Bus Jam for all 21 years, and she said it makes the holidays bright for so many people each year.

“If you are somebody in crisis, all you’re thinking about is feeding your family and putting a roof over your head,” Kilmer said. “And then Christmas shows up. I’ve been there. It takes the stress out of that.”

Kilmer said when Bus Jam first began, the idea of providing food wasn’t even considered until people started dropping off food to fill the bus. The first year, 1,600 pounds of food was collected. Last year, more than 100,000 pounds of food was donated and given to families.

Bus Jam also collects toys and clothes for children, and parents then get to shop for their children shortly before Christmas.

But it takes people giving to make it a success. The Bus Jam Toy and Food Drive and Bykes for Tykes Toy Run is Saturday, December 3, from 10 a.m. to 3 p.m. at Coos Bay and North Bend Bi-Mart’s and Bandon US Cellular.

McGaughy and Bogatin urged residents of Coos Bay and North Bend to stuff the buses this year, saying both districts have families in need that will need assistance to have a merry Christmas.

Until December 3, blue Bus Jam barrels will be at stores throughout Coos Bay and North Bend, including both Bi-Marts, McKay’s in Coos Bay, Empire, Lakeside and Reedsport as well as Grocery Outlet, Pony Village Mall and many more. Toys and non-perishable food items can be left in the barrels any time before December 3.

Families in need can sign up for Bus Jam by visiting busjam.org. Kilmer said the sign-up link is not active yet, but it will be soon as K-DOCK, Rotary and residents throughout the region work to make sure everyone has a reason to smile on Christmas morning.