Coos Bay schools qualify for breakfast, lunch at no charge 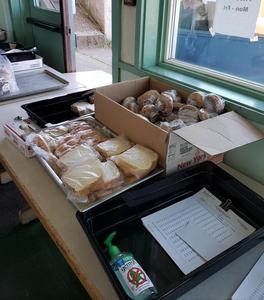 No students will be charged for meals over next four years

For the next four years, all students attending school in Coos Bay School District will receive breakfast and lunch at no charge.

Janine Leep, the director of Nutrition Services for the district, reported the entire district qualified for no charge breakfast and lunch through the states Community Eligibility Program.

“CEP is a program ODE has that allows us to feed the children in the community,” Leep said.

To make the determination, the Oregon Department of Education looked a variety of factors such as the percentage of students receiving benefits such as SNAP, the number of homeless students in the district and the average income in the community.

Leep said the district has been borderline for the CEP qualification for some time, with only certain schools eligible in the past. But with the ruling last month, every student at every school will now qualify for food while at school.

Leep said on average, 8,000 lunches are served to students every week and 5,000 breakfasts are served. And that number remained strong, even during COVID, when schools were initially closed and then had limited access.

“We fed a lot of students, a lot of families,” she said.

Leep said food at schools and select other locations were offered within days of schools being closed down, and the service never faltered during the entire pandemic.

All in all, qualifying for breakfast and lunch for all students without charge is a big benefit for students and their families, Leep said.

“It’s huge in the area because there are a lot of kids who used to go hungry because their parents didn’t make enough money,” Leep said. “I was one of them.”

The Coos Bay School District partners with Sodexo to provide breakfast and lunch at each of the schools in the district. At almost every campus, the food is prepared on site and served to students daily.

Leep said Sodexo is always hiring to ensure there are enough employees to prepare, serve and clean up after meals. If you are interested in a job at the same time your children are in school, Leep said job listings for Sodexo can be found on Indeed.